The Fragility Exhibition with Prism at Hoxton Arches seems to have been and gone so quickly! It's already well over a month since it ended and now we're looking to the next venue, the RBSA Gallery in Birmingham where our exhibition will open on Tuesday 8th October, closing on Saturday 19th  October with a Private View on Saturday 12th in the afternoon. I'll be there at the PV and am also stewarding on Sunday 13th in the afternoon.

I have two works in this exhibition, the wall piece A Sacrifice Too Great and little artist's book A Quiet Singing. The wall piece is made up of silk-painted and digitally printed fabrics, opaque and transparent, on a linen base with inclusion of dried flower petals and is hand stitched throughout. The book A Quiet Singing, also all hand stitched, is made up using mostly two different types of paper, linen and silk-painted fabrics. 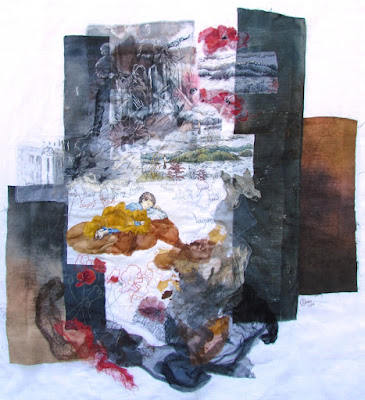 A Sacrifice Too Great 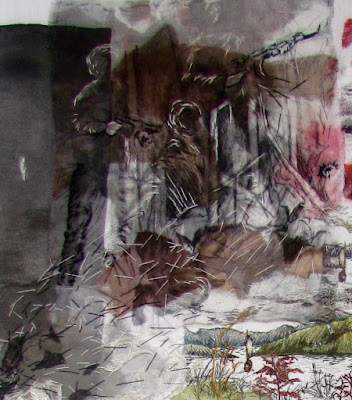 I made this piece thinking of the fragility of society, how a peaceful situation can so quickly become one of terror and uppermost in my mind was what might happen to the position of the border in Ireland following Brexit and what impact this might have for the people of Ulster. The last thing we want is some sort of return to the violence and tension of the Troubles.

In the piece, the violence is represented by the shadowy figures of the gunmen, seen in this detail above and by the building where an explosion is happening, as seen in the detail below.

Stitched beneath the gunmen is a little scene from one of the many trips I made to one of my favourite places in Northern Ireland, a beautiful area of water and islands, Strangford Lough. I was born in Newtownards, at the head of the lough and we lived not far from it. In the background behind the water and near-ground islands, are the lilac forms of the Mourne Mountains. I love the water, the springy volcanic soils of the islands, the hills and valleys of the mountains.

These places were visited in the peaceful years of my childhood and their beauty is locked forever in my soul, the tangy salt of the rippling water, heady coconut smell of gold-yellow whin blossoms, spring of pine needles underfoot on wooded slopes. But the mountains were also visited in my adulthood when they were places where gunmen had hide-outs in the secret folds of the hills and I witnessed this myself on two occasions when men looking at myself and those I was with through binoculars, ran towards us across the fields, rifles in hand. We escaped driving fast on the narrow mountain roads. 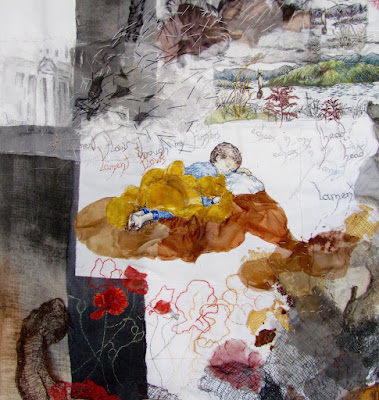 The sleeping child represents both the fragility of humanity and also the vulnerability of children themselves. In sleep especially, the child needs to be safe and protected and one of the cruellest aspects of conflicts, it seems to me, is when the young suffer for the political aims of others particularly when these aims are sought through violent means.

I thought carefully about what fabric to to use to cover the child. The little boy was originally a drawing then watercolour of my son asleep when he was just under four years old, snuggled up under his favourite blanket. In the original drawing he held a favourite toy-companion not included in this portrayal. The fabrics that I chose to use are some of my silk-painted chiffon and organza, again not in the colours of the blanket in the original painting but in a neutrality of almost autumnal bronze-golds. These fabrics are semi-transparent though I chose not to use this characteristic over the child's form which is curled up and hidden beneath layers of covering. The folds are created through manipulating the fabric into the shapes I want then securing these with the positioning of small running stitches. In my work I use running stitch as I would a brush or pen, choosing the length and direction of every sitch I make and working in this way, the cloth maintains its sculptural folds in this and other pieces with no need of spray or fixative.

This little figure floating on the linen ground shows just two of the many methods which the textile medium offers the artist, his body and pyjamas formed through through a network of hand stitches and coverings built up using the sculptural properties of the cloth itself.

My choice of linen as ground fabric is significant in that I have personal connections to the fabric itself and it has a great social and economic significance in Ireland. My grandfather was a designer of embroidery images for Belfast Linens in the early to mid-twentieth century and two of my cousins run a firm producing linen goods in Dublin bequeathed to them by my uncle who first worked for and later became the owner of the firm. The linen industry was very important to the Irish economy and, along with shipbuilding, to the growth of Belfast in the eighteenth and nineteenth centuries particularly. Belfast was granted city status in 1888 and the city became the capital of Northern Ireland in 1921 following the formation of Northern Ireland as a political entity in 1920.

Silk-painted linen pieces are also stitched to the raw ground of the bleached linen where their colour and prominent forms add sombre voices to the work. To use linen fabric within textiles as creative medium brings with it associations of domesticity and familiality and also connotations with the wider economy and society which working with a medium such as oil painting would not do. Linen has a powerful voice and brings with it these associations of industry carried out in peace and domesticity of the family to the images of conflict in my work on the Troubles. 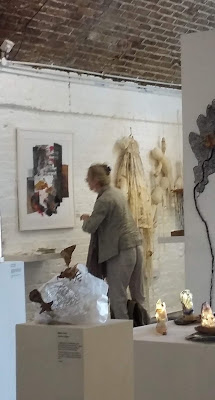 Visitor looking at  A Sacrifice Too Great in Hoxton Arches Gallery, London

The wall piece then speaks of the vulnerability of both humanity and society and the little book A Quiet Singing takes the discussion further to speak about the violence of the conflict of the Troubles but also the level of reconciliation achieved after the Peace Process of the late 1990s and the desire to continue living with this peace, however imperfect and despite tragic breakings that have occurred. Poems also speak of human relationships and the power of love. 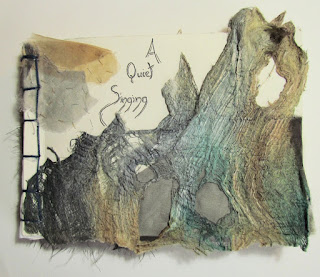 Front cover of A Quiet Singing


The book includes images and five complete poems and is made up using Saunders Waterford paper 300 gsm with its lovely smooth surface, ideal for the words of the poems, the textured surface of Indian rag paper and fabrics including linen, cotton, organza and silk-painted mulberry bark.


The poem Belfast: Lagan Revisited is the second one on the book and starts with the lines:

It was black and red then; 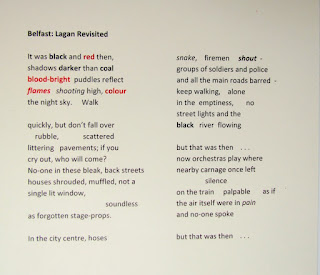 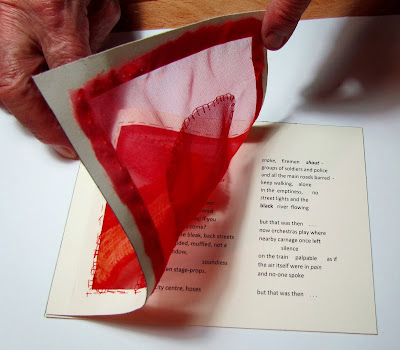 This image shows the book during making

As you will have seen from the above excerpt, colour features prominently in this poem and I used the properties of the organza itself to enhance what the words are saying. Silk-painted in red, the organza fabric was cut into sections that were hand-stitched together then placed within a 'frame' of  Saunders Waterford paper. Although the fabric page was created in a relationship with the poem that follows, it also forms a page in its own right and words from the poem and beyond are hand written on the fabric's paper 'frame'. 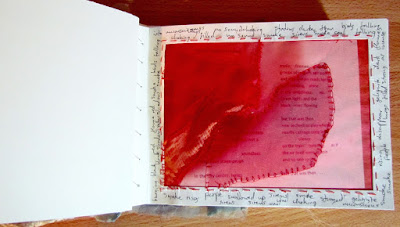 The organza page in its finished form. This also illustrates how the words of the poem are seen through the fabric.


The poem Gift: for my Father is another of the poems featured and included with it is this Portrait of my Father. The image is a photograph of an embroidery digitally printed onto cotton and mounted on Indian rag paper. 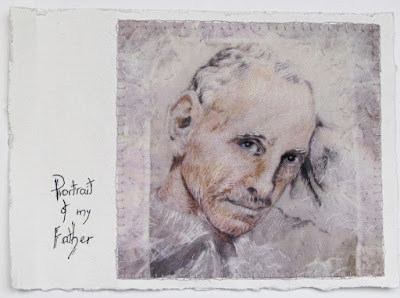 My father died in December 1991 and I wrote the poem for him in the autumn just about a year after he had died in words that came to me as I thought about him while listening to the wonderful cadences of Barber's Adagio. Music has an almost mystical power to move us and reach into the very core of our being and, although on revision I have played about with the position of the words, especially later in the poem, the words themselves remain essentially as they came to me to the flow of the violins from somewhere in the very depths of my soul. The image has featured in the MA Anthology a Grain of Sand published by Aberystwyth University and the poem begins:-

Beyond the window, wan grey sky
seeps onto rooftops, clothes-line
drips the reign of autumn;
within the room, I sit, still,
close my eyes and follow
strings of violins sing sounds
of Barber’s ‘Adagio’, silk,
beneath sparrow’s pipe-trilled pizzicato;

I feel that when I am writing poetry, it is a process akin to writing music which I have also done during my life  -  many years ago, music almost became my main area of study and although my life moved in a different direction, the rhythms and sounds of music have continued to remain an important part of my creative process in the various media in which I work  -  colour, cloth, stitches, words  -   and I have at home a piano and a guitar which are precious to me. 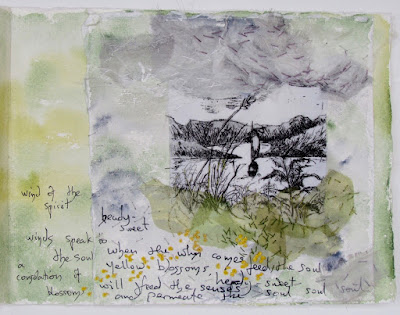 One of the book's closing pages 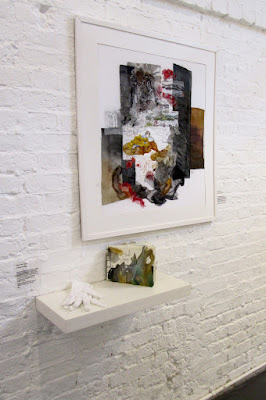 Pictured here are A Sacrifice Too Great and A Quiet Singing on exhibition in Hoxton Arches Gallery. White cotton gloves were supplied so that visitors could safely look through the book and this method worked well in the exhibition with visitors making use of the gloves to examine what they wanted of the book. 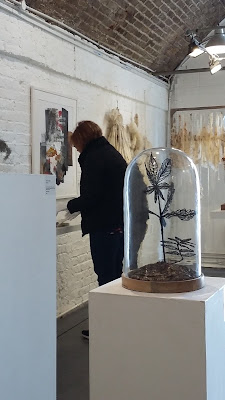 Visitor making use of the gloves to look through the book

Posted by Eileen Harrisson at 00:23