This year, my stitched artwork is being seen for the first time in Northern Ireland, the place of my birth and where I grew up. It has taken a while to be shown near to my home, mostly because the majority of my studying and exhibiting life has been carried out on the British mainland, in England and Wales, where I have now made my home.

I was born in Co. Down and lived there at the head of Belfast Lough on the shores of the Irish Sea, for the first eighteen years of my life and, with times away for university, for another ten years after that. My work is on exhibition in Co. Londonderry in Limavady with he exhibition 'Stitched Legacies of Conflicts' in the lovely space of the Roe Valley Arts and Cultural Centre and it runs until Saturday 26th November 2016. 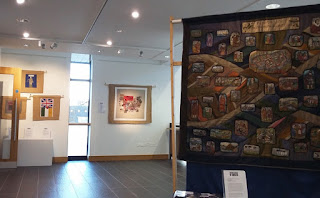 This is a view of the entrance to the exhibition in the Centre. In the foreground is a piece by Deborah Stockade mapping out the Plantation of Ulster and my work 'Continuum' is seen on the right on the wall beyond. 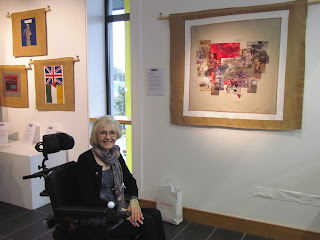 Myself by my work with, behind me on the left, three arpilleras on the Troubles in Northern Ireland. 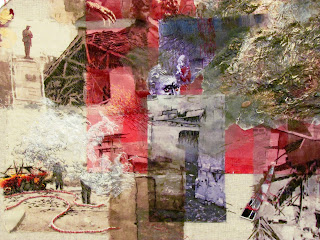 A detail showing some of the images on 'Continuum'. This piece references both World Wars and the Troubles and speaks about how we continue to deal with conflicts in various parts of the globe; the 'war to end all wars' has sadly not been able to do this.

The exhibition, curated by Roberta Bacic, is organised by Conflict Textiles and more can be seen about her work in this field on:-

'Stitched Legacies of Conflicts' covers work made by women to express how they have used the medium of stitch to deal with experiences of conflict in their lives. Many of the pieces are arpilleras, a word which means hessian, and they take the form of quilts made to commemorate the missing and the dead. These arpilleras are often made from scraps of material available in the house and are mounted on the rough ground of the hessian. 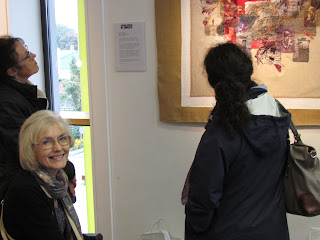 In this image, you can see my work which I collaged on raw linen then set onto white cotton calico and beyond this, the hessian ground which connects all the exhibits in the exhibition.


During the exhibition, there was an event organised at which Roberta gave a guided tour of the exhibition and I spoke about my work. 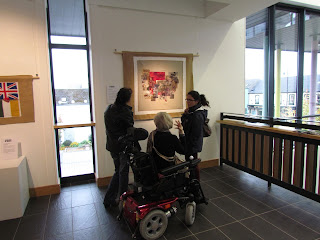 This is a picture of myself talking to, as in the previous image, on the left, my sister, Joyce and, on the right, Stefania Gualberti, who is qualified in peace studies and has a great interest in arpilleras.

After this, there was a workshop led by Deborah Stockdale in which we made little cloth dolls. 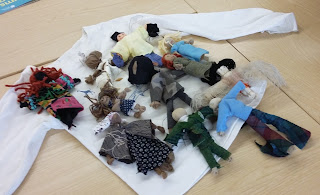 This is a group of the dolls made at the workshop. My little doll, named Harriet, is on the bottom left.

Dolls such as these are often a feature of arpilleras and, for the workshop, we each chose a work from the exhibition with which to connect our own doll. I chose to connect mine with Deborah's piece 'They Fell like Stars from the Sky' in which a circle of little 'grannies' can be seen. 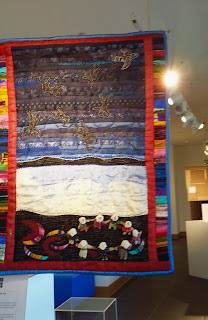 'Harriet' refers to both my maternal and paternal grandmothers in that I chose a fabric for her headscarf on which were little hens and a navy blue material for her dress which features a spot-like pattern. The headscarf fabric brought to my mind a story told by my father about how, during a time when my grandparents kept hens, there was one of them that just wouldn't stop squawking and, in total exasperation, my grandfather went out and wrung its neck, after which the family had it for dinner! The dress material made me think very much of the favourite dress owned by my maternal grandmother, whose name I gave to the doll. This dress was of a softly falling navy fabric with a slight sheen, decorated with a white spot pattern and my grandmother called it her 'shower of hail' dress. 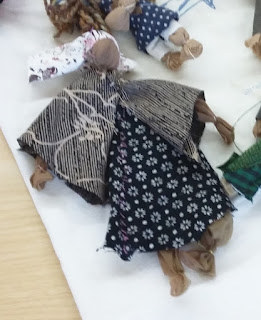 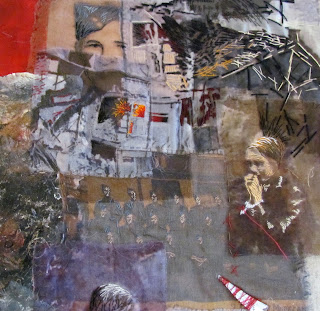 This is another detail from 'Continuum' and in it can be seen my father in his RAF forage cap along with his squadron pictured in Morecambe when he joined up. The ruined buildings and crying child refer to the Troubles but connect also with the terrible suffering of children and adults today in the Middle East especially. Conflict, it seems, is something that humanity has constantly to deal with.


Posted by Eileen Harrisson at 05:42 No comments: