It has been a dramatic end of the year for Aberystwyth, the seafront and prom so devastated by the storms and spectacular tides! I was here at home in Dolgellau when most of this happened. We lost our lovely pear tree when it was broken in the high winds but some of the trunk and branches remain, so we're hoping very much that these might continue to survive and grow. Also broken away were several pretty trellises along the back fence and although this damage might seem minor compared with the seafront and other parts of the country, we're still sad because the tree had grown so well and was so pretty!

Artwise, I'm so excited because I've been awarded Arts Council funding for the first part of 'Vigil'  and I've just begun working on it. I'll be meeting now with Ed to hear his first take on the music  -  more on this and the project generally next time! It was also great to have two pieces selected for the Gas Gallery Open in Aberystwyth in December  -  very fortunate in being able to go in for this, as my university studio made me eligible as working, at least some of the time, in Ceredigion!

This image, 'Swirl of Bright Water', shows one of the pieces selected. 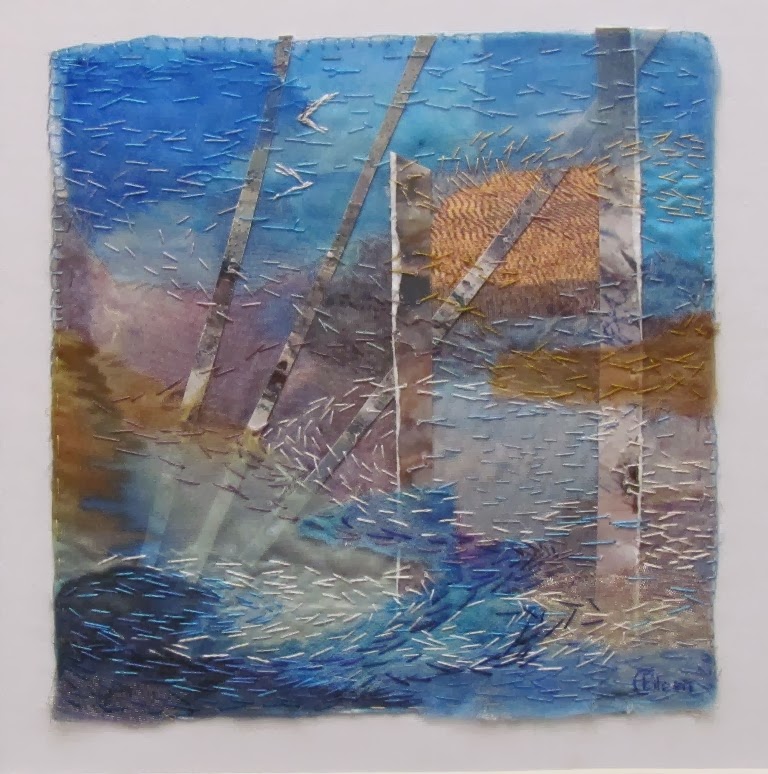 I have also included a couple of pictures of Aber seafront before the storms and high tides hit. 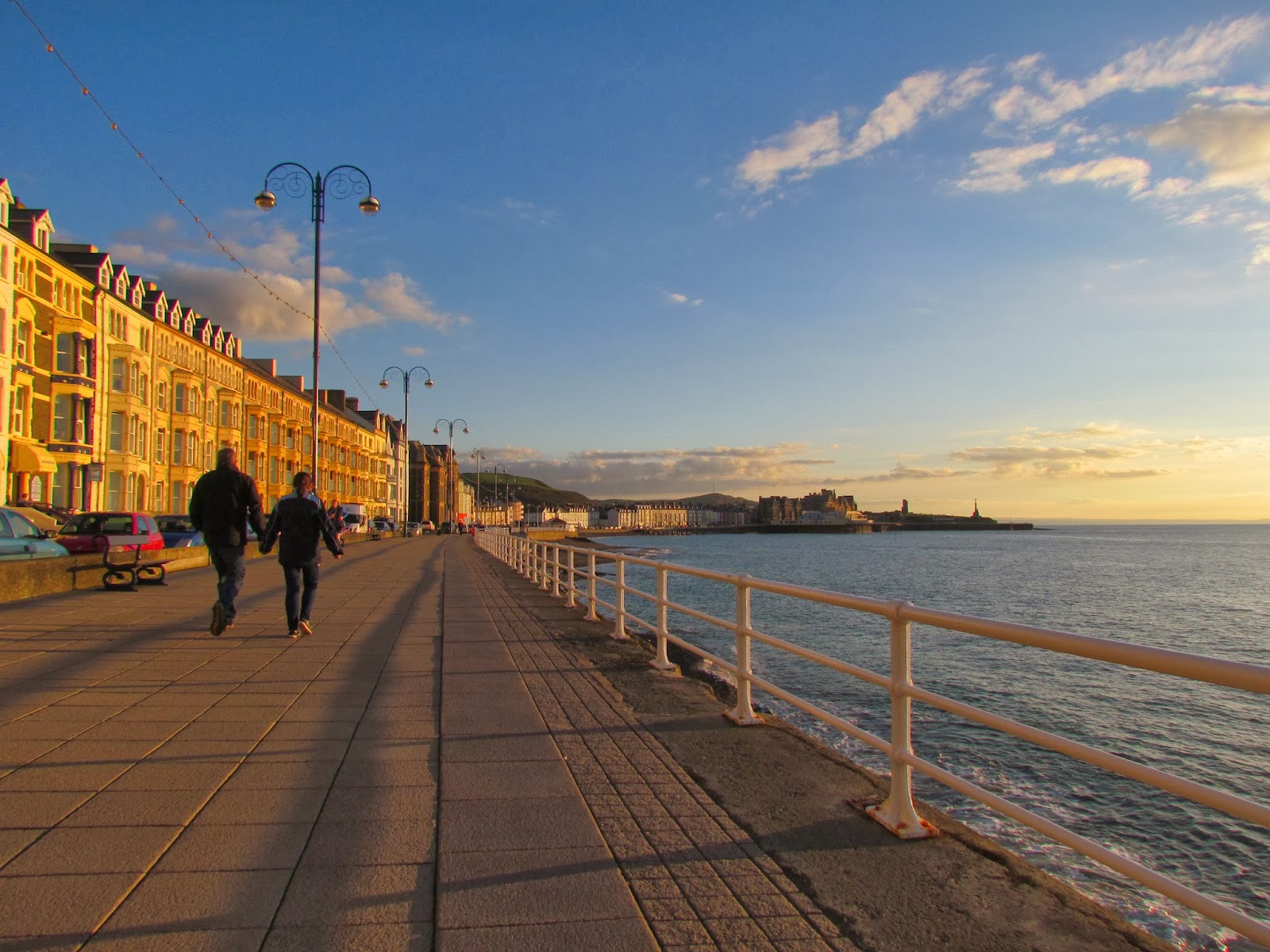 The prom on a lovely afternoon this autumn. 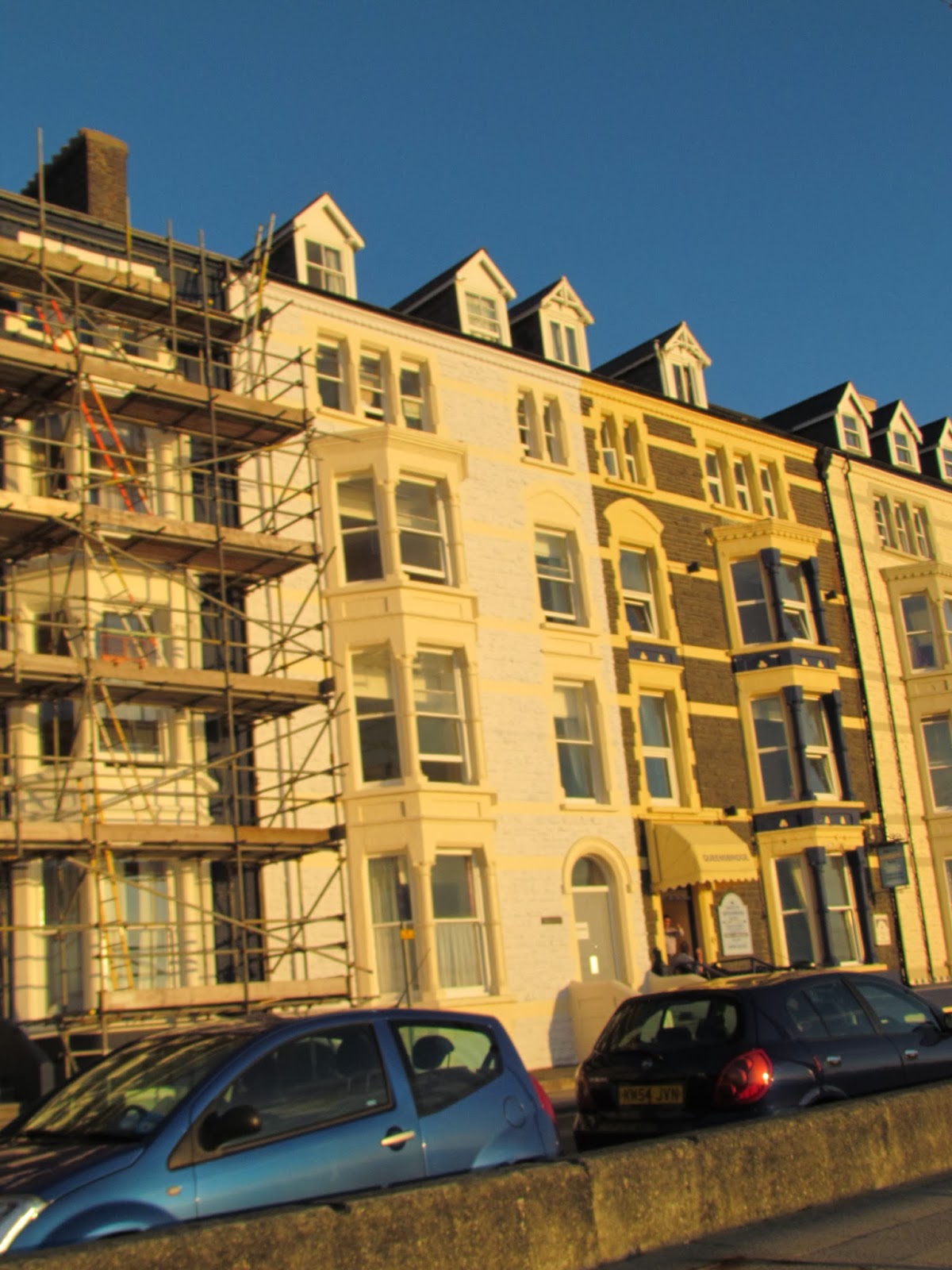 Years ago, in my undergraduate days at Aber, I stayed for a while on the seafront in Alexandra Hall Annexe, in a super room right at the top of the building.  Now I walk along the prom (well, trundle in the wheelchair!) and look up at where I used to be, that is, I did until just the other week! It was so exciting living there, when the tide was running high, if my door wasn't locked, it would open and close when a large wave broke against the seawall and small pebbles would be tossed right over the roof to scuffle down over the tiles! Of course, this was the excitement without the damage, which is so sad and such a shame  -  hopefully the council will be given enough money to have the necessary repairs done.

My daughter took the following photo of me from my collection of slides from the 70s and got it onto computer, so I include it for fun! It was taken during my undergraduate days while I was on my year abroad in Italy. The time of year is early springtime, 1974, and I was visiting the Tuscan hills near a little town called Rocca San Casciano. I used to love knitting back then, mostly jumpers and cardis, and this pink jumper is one of my creations. As the image shows, seventies' flower-power had not passed me by! 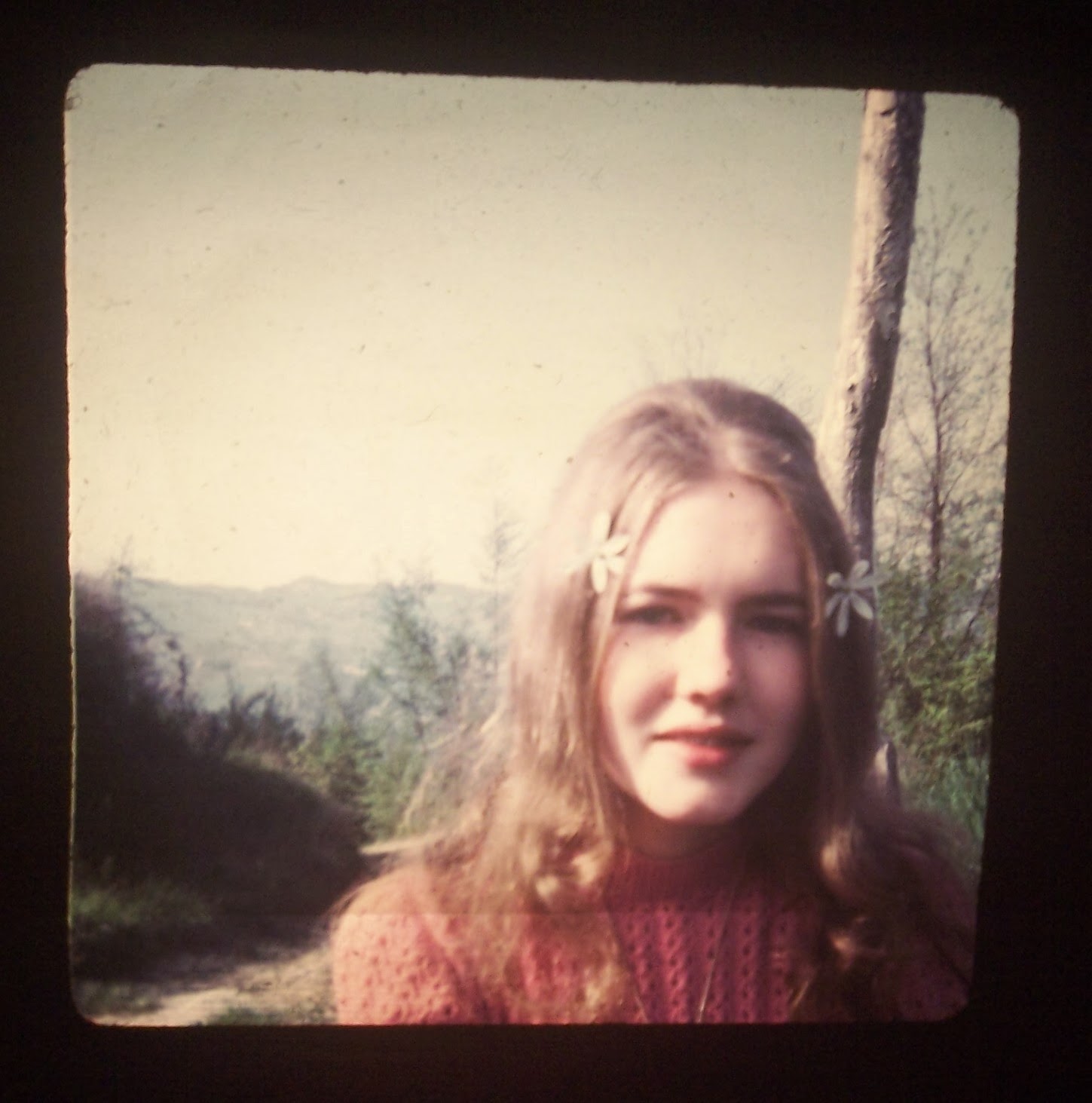 What a strange thing time is, in some ways this seems as if it is a photo of someone else, in another lifetime; in other ways, I'm still the person looking out of this picture; I still love art and music and poetry, still have my dreams  -  perhaps foolishly! Life has also brought me many riches I had never dreamed could be possible  -  nothing whatsoever to do with finances! I feel even more aware now of how short life is, of how time races by. On several occasions, I have faced mortal dangers and survived but there will be an end, that is only natural and the separation from loved ones will be the hardest thing. The date and time for this mortal chapter to finish are, of course, known only to God and that's fine by me. My deepest prayer is that it will be my time to go and Juls and Ed will still have many years of joy-filled, fulfilling lives. How many of these I may see is not up to me to say, I just treasure every second of knowing how they are, how they're doing, and hope to be given strength to finish a little more before I go. And who will go first, me? Arthur?  -  something to be acknowledged now and faced only when it comes.
Our poor pear tree has faced its mortality and we don't know whether the part that is left will still grow. The following images show the garden with the broken pear tree lying on the grassy ground and the gap in the corner which the tree's lovely branches used to fill  -  the back fence is also without the trellises. But we have been lucky, no terrible floods pouring in and ruining the house! 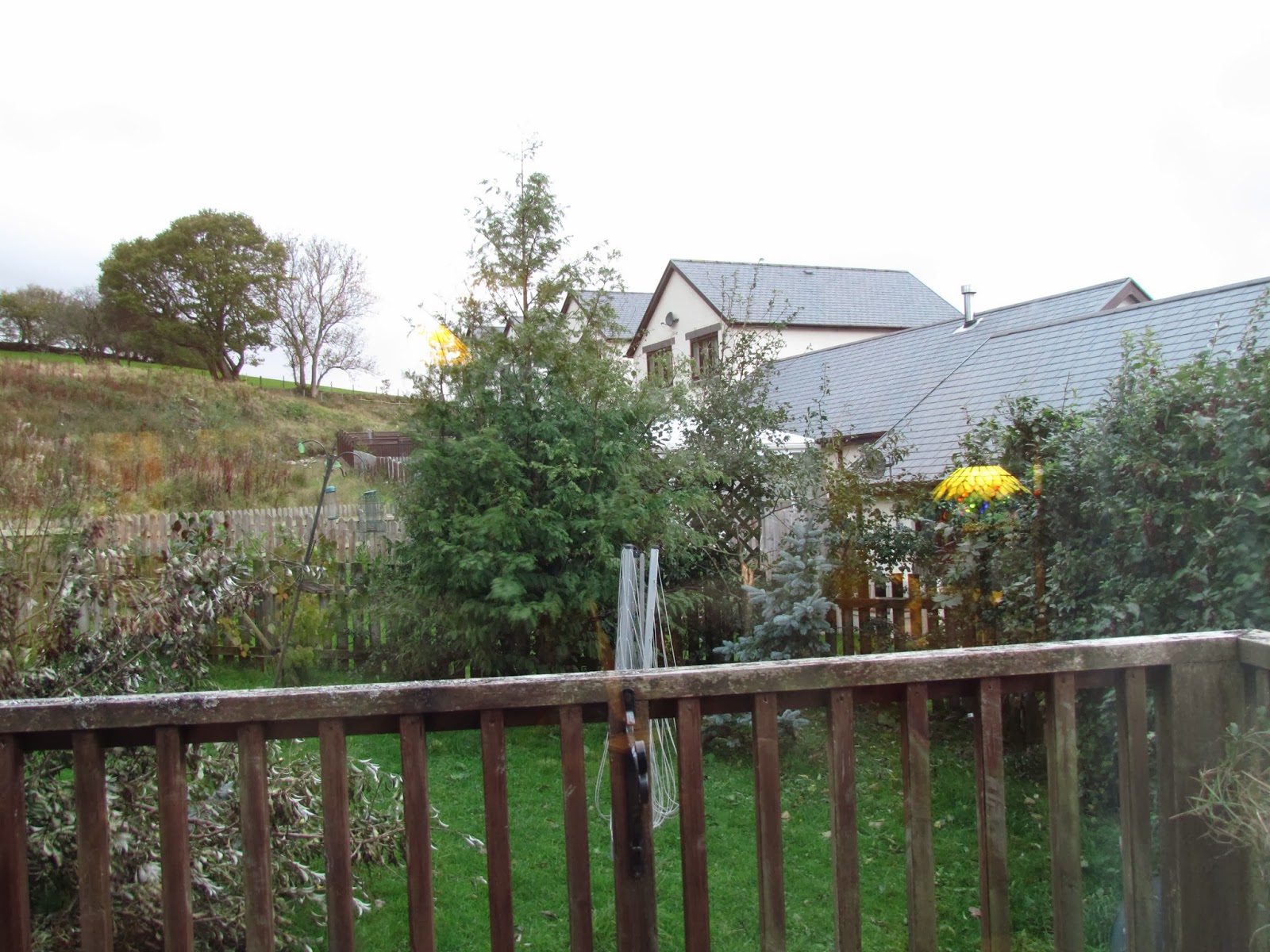 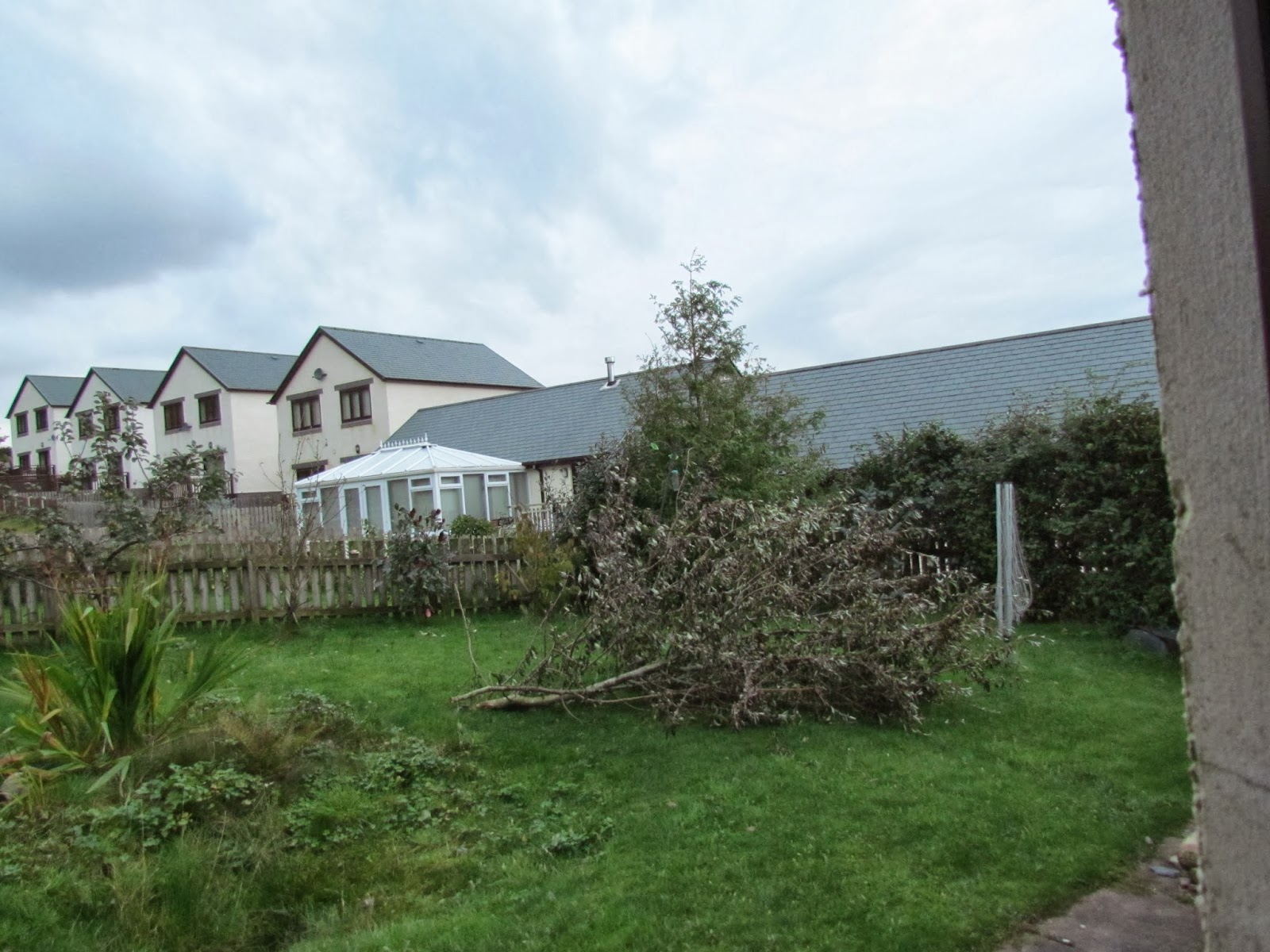 Until the next time!
Posted by Eileen Harrisson at 17:17 No comments: