As part of the War-Torn Children Exhibition in the Roe Valley Arts and Cultural Centre, Limavady County Londonderry in which I have my piece Her Pillow, the Earth, I gave a talk/workshop to a group of specially invited artists, practitioners and those with a special interest in stitch in October in conjunction with the exhibition. 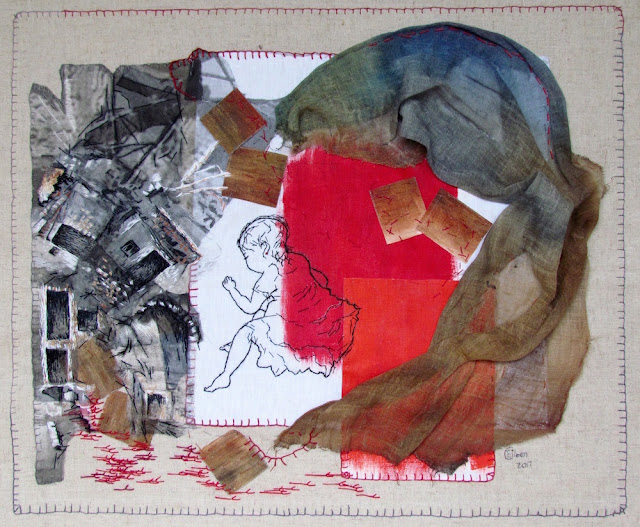 Her Pillow, the Earth

This is my piece Her Pillow, the Earth and, at the Opening of the War-Torn Children Exhibition in the Roe Valley Arts and Cultural Centre, Limavady, Brenda Chivers, Mayor of Causeway Coast and Glens Borough Council, curator Roberta Bacic and Billy Coyles who hung the exhibition were photographed by my piece.

I enjoyed giving the talk and doing the workshop afterwards with the participants. 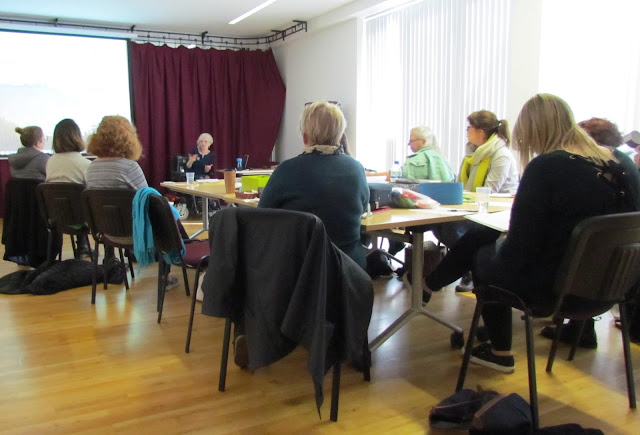 The centre supplied a nice big screen for my Powerpoint images and also had the necessary equipment for the sound elements of my presentation. 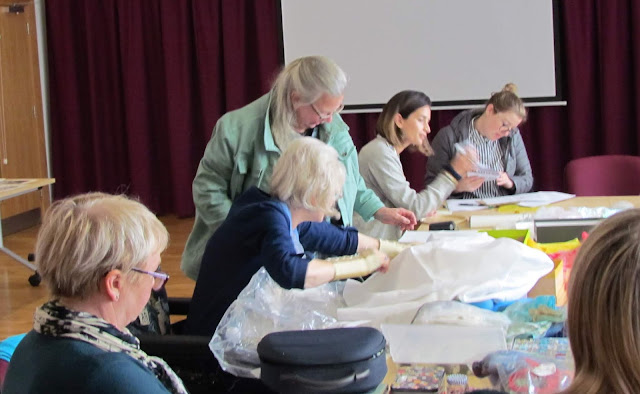 Getting going with the materials 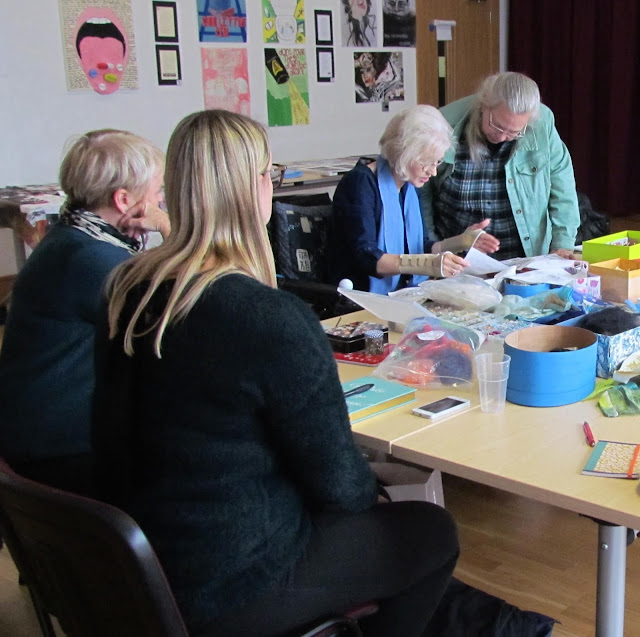 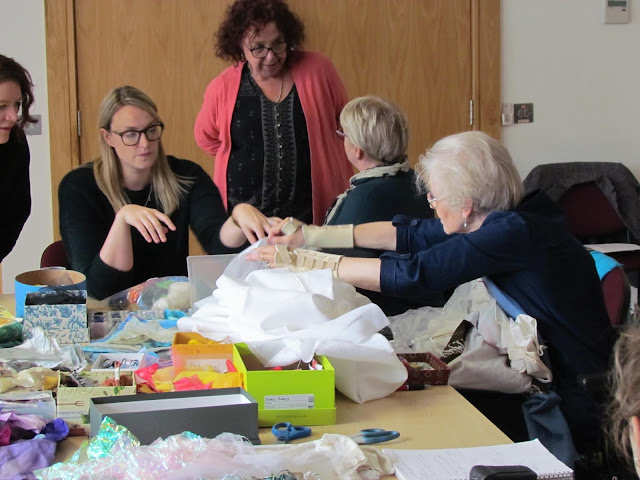 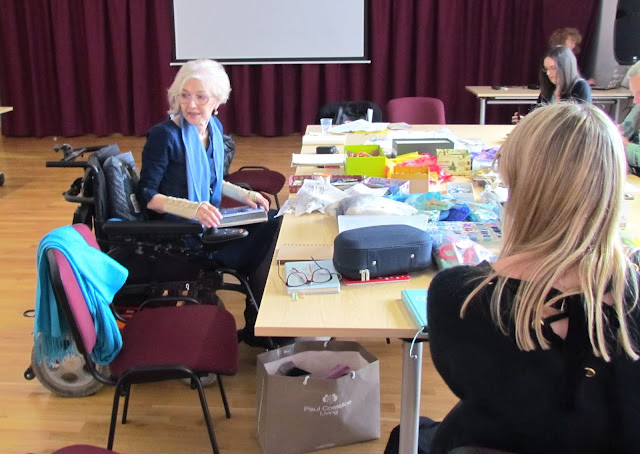 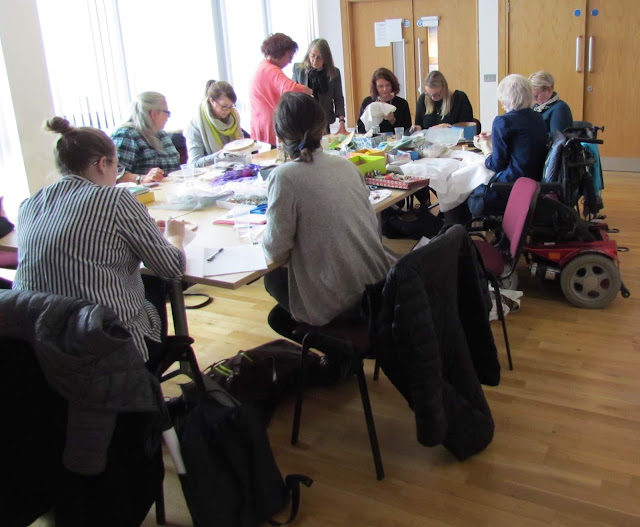 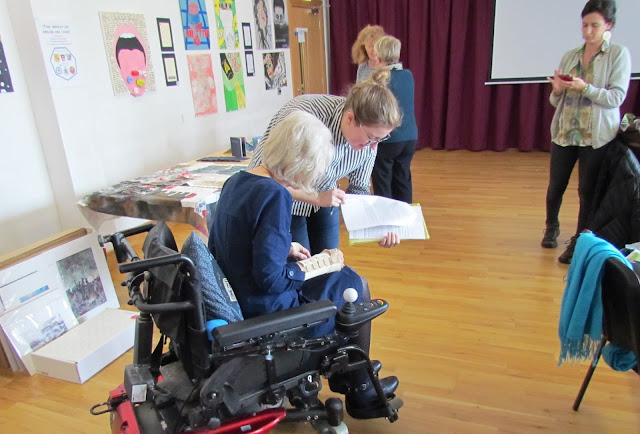 A little discussion at the end of the workshop

It was a pleasure to get together with those I already knew and to meet others I hadn't met or worked with before. The exhibition came about largely due to Roberta Bacic of Conflict Textiles and more about this organisation can be found on their website  conflicttextiles  with some more photographs of the workshop taken by Breege Doherty at 1200_photo-gallery-EHarrisson-wshop-050918-BD.pdf

Posted by Eileen Harrisson at 04:55 No comments:

Exhibtions this year have been concentrationg on my conflict work as the PhD progresses. After In a New Light the two main shows have been for the Willow Gallery, Oswestry's War and Poetry, Conflict and Peace Exhibition 22nd September - 11th November 2018 and War-Torn Children Exhibition 5th September - 29th November 2018 in the Roe Valley Arts and Cultural Centre, Limavady, County Londonderry. The Willow Gallery Exhibition is on as part of the Wilfred Owen Festival, Oswestry which has a rich and varied programme of exhibitions and events, music and literature.

I have titled my work for the Willow Gallery Conflict and Redemption and it features a spread of pieces on this theme including wall pieces, film, three-dimensional textile and sound. In theme, the range covers comment on World War I with Requiem: les Fleurs du Mal, a detail from which is shown below, to pieces based on my experiences of the Troubles in Northern lreland to the work Continuum which includes images relating to the two world wars as well as the Troubles and it was made as an expression of sorrow at the ongoing presence of armed conflicts in the world. 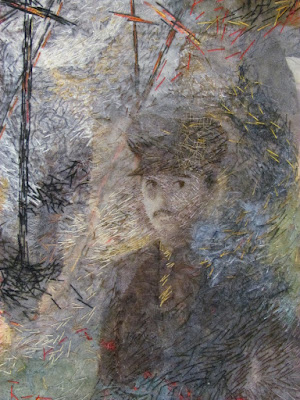 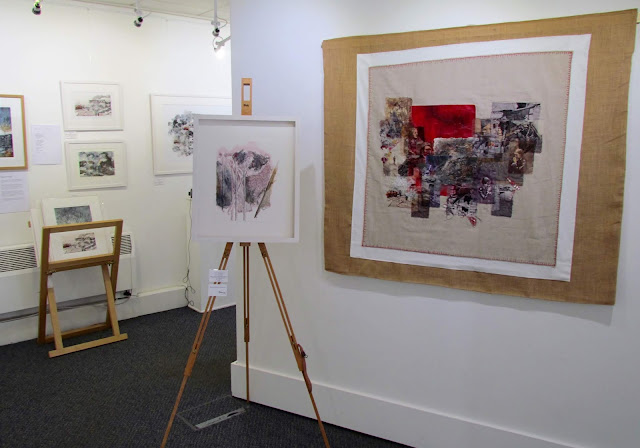 Continuum and other pieces in Willow Gallery 2018

Pieces in this exhibition featured those shown in Mid Wales Arts Centre in autumn 2017 and more.  I carried on with some work towards the exhibition over the summer, including during our wonderful stay in the lovely gîte in Brittany where we have been several times. It's great and slightly different every time! I always bring my work with me  -  stitching on the patio in the beautiful garden in warm Breton sunshine, what's not to like! 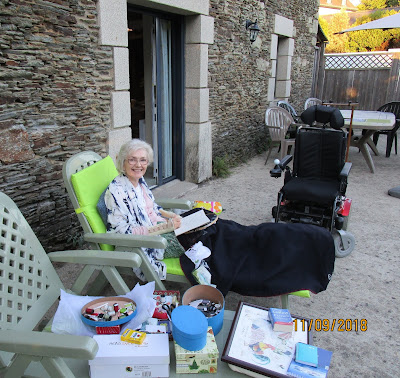 Self on the patio at the gîte with stitch, books etc and the nurse's cape over me!

It had been very hot in the afternoon, too hot even to work outside but the evening was perfect! I so love having the nurse's cape; that it is one worn by a nurse from the hospital I was both patient in and worked in makes it very special to me and I stitch into it with love. There is something about touching a garment that is not just a theatrical costume to stand in for a role but this cape was worn by someone when she came off duty as I would have worn mine. I loved my cape! The heavy wool is incredibly warm and wrapping it around you felt and feels like a protective blanket  -  I have put blanket stitch all round the hem of the cape because of its various connotations.  The cape's previous owner had also stitched her name into it using red thread; it has a history unknown to me, I am giving it a new one or perhaps more adding to what has already been, even though I don't know exactly what that was. 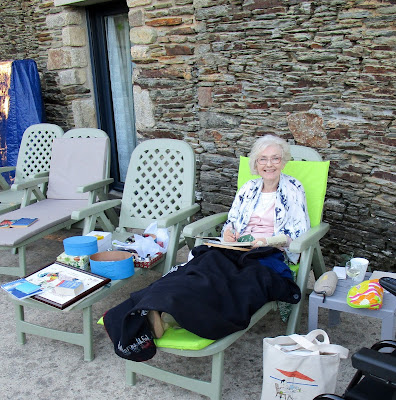 Another little view of self and cape etc

On the extreme left you can just see the table-tennis table with its protective blue cover hanging by it.  A couple of years ago on a previous holiday, I played wheelchair table-tennis with Ed. We had great fun! 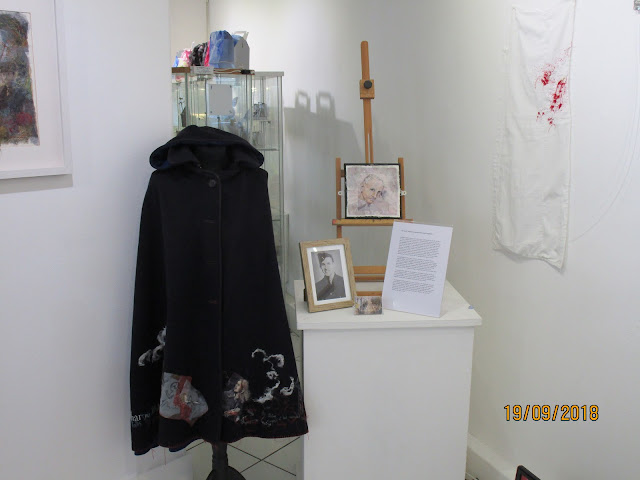 The cape in what I call the 'Survivor's Corner' installation, part of the exhibition in the Willow Gallery.  (taken with Arthur's camera) 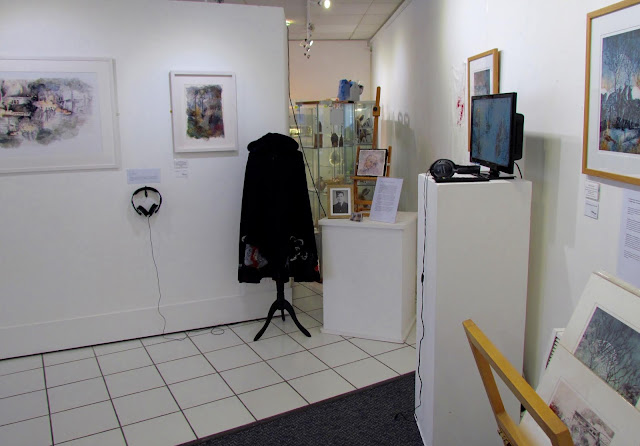 A wider view of the gallery including cape and other pieces.

The headphones on the wall are for a sound track that features different voices reading my poem 'Fragments' with the augmented sound of stitch. The voices and sound of stitch weaving in and out of one another echo in sound the multiple visual layers of fabric and thread. I felt this track was particularly appropriate for the piece on the left, Street Violence with its repeated figures and also for Requiem: les Fleurs du Mal with its multiple crosses.
On top of the cabinet is another set of headphones by the screen that shows the film Continuum. 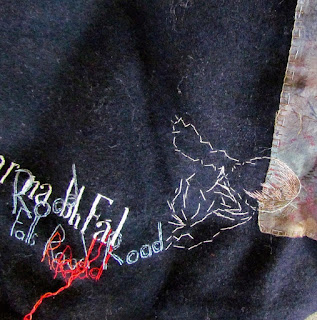 Detail of stitching on cape.

The imagery on the cape is an evolving process and it now includes the 'Falls Road' stitched in English and Gaelic. The hospital is situated on the Falls Road. There will be more images, including words, as time goes on until I feel the work is finished. I start pieces with an idea of what I'm doing but then grow the artwork in an organic process whereby I respond to what the work is saying to me. The image of the baby has various significances to me; the infant represents the vulnerability of a young child, bringing to mind my own children and also the time when, as a student nurse, I was put in charge of the baby section of the ward where I was working. This was just my second ward and it was then that I held a baby for the first time! 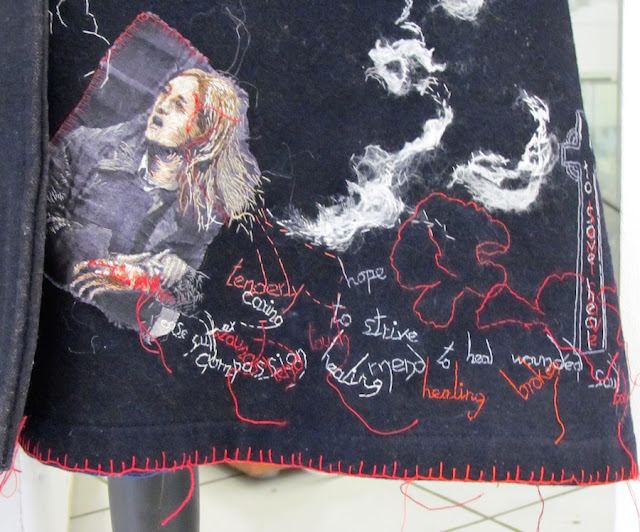 The cape with more lettering and glimpse of imagery including a Celtic Cross.

I have always loved the form of the Celtic Cross and feel it is something that can be claimed, if that is the right word, by both 'sides' of Ulster's religious divide. Two such crosses that stand out in my mind are one that I saw at Saul near Downpatrick, Co. Down and the other by the abbey on Iona. The cross on the cape is drawn from the Iona cross.

The nurse's cape represents the compassion that arises when conflicts break out. There are those who perpetrate the violence but, conversely, those who try to do something against it and who offer help to the suffering. Another of my works that speaks of peace is A Belfast Peace: In the Name of Peace, pictured below. 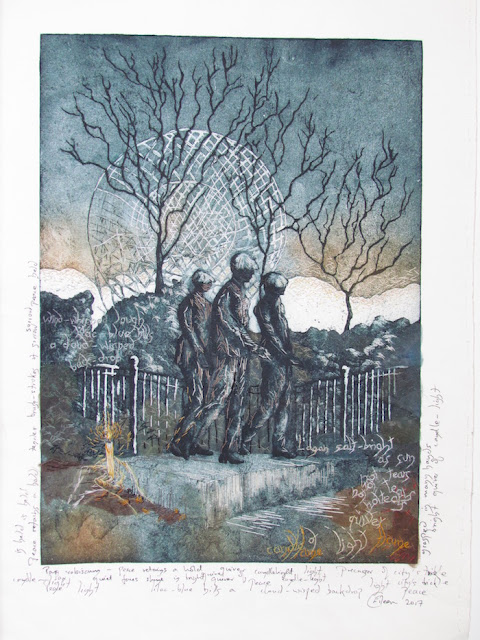 A Belfast Peace: In the Name of Peace

This shows the work photographed in its entirety, including border with words taken from my poetry. Unusually for me, this is an etching and aquatint which I stitched into. The incident speaks of the candlelit vigil that was held outside Belfast City Hall and attended by many people after tragic shootings in 2009 that broke into the peace that had been holding since the 1998 Peace Process Agreement. First two young soldiers were shot dead then a policeman and poeple came out in peaceful protest against these actions thought to have been carried out by dissident republicans. 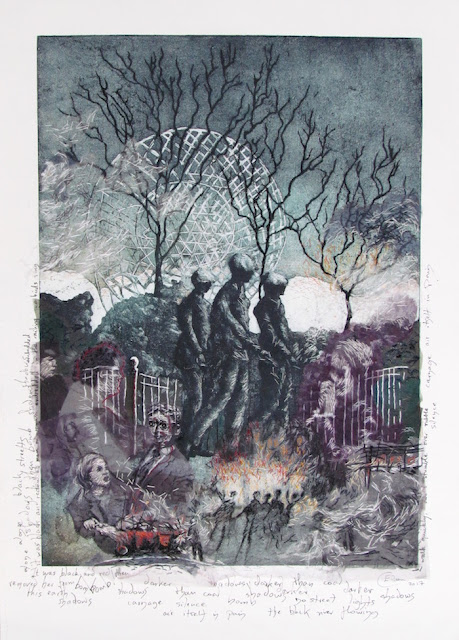 A Belfast Peace: Beneath the Surface

This is the companion work to A Belfast Peace: In the Name of Peace and this time speaks of the tensions that lie beneath the peace that has brought such prosperity and changed living not just to Belfast but to N. Ireland generally. The figures which are seen in both works are drawn from photographs I took of bronze statues of Titanic workers on the Newtownards Road in Protestant East Belfast and the image behind them is of the sculpture Rise situated in Catholic West Belfast by the motorway where it links to the Falls Road. This sculpture which represents hope can be seen from a long way across the city. These sculptures cannot be seen together in reality but are placed together in my artwork as a hope that the divisions between sections of society that still exist in N. Ireland can one day be, if not dissolved, at least accepted in respect not just by those who already live in peace in this way but by everyone of all religions and none.

Before I started to make visual pieces on the Troubles, I had started to express my sorrow at what was  happening in poetry and I gave a poetry reading/performance of my poems as part of the War and Poetry, Conflict and Peace Exhibition Opening in the Willow Gallery. As we approach Armistice Day and the celebration of the end of the First World War 100 years ago, I'm now going to give another reading of my poetry on Saturday 3rd November at 12 noon. 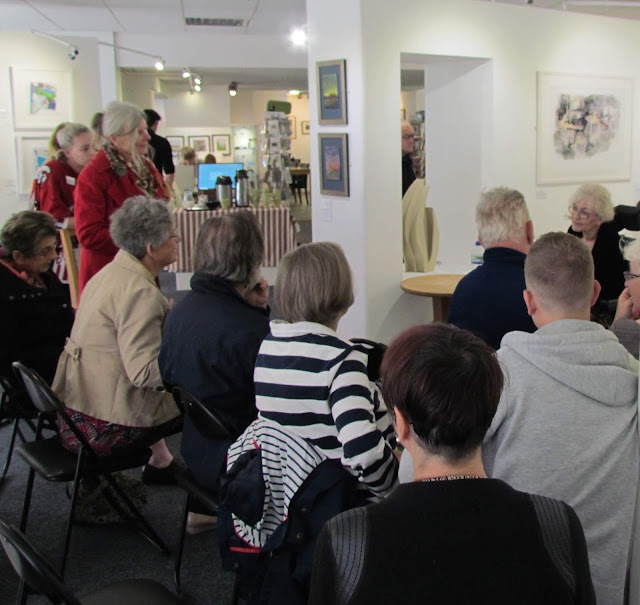 Self seen on the right beneath one of my pieces and audience during my poetry reading/performance in the Willow Gallery 22nd September 2018. 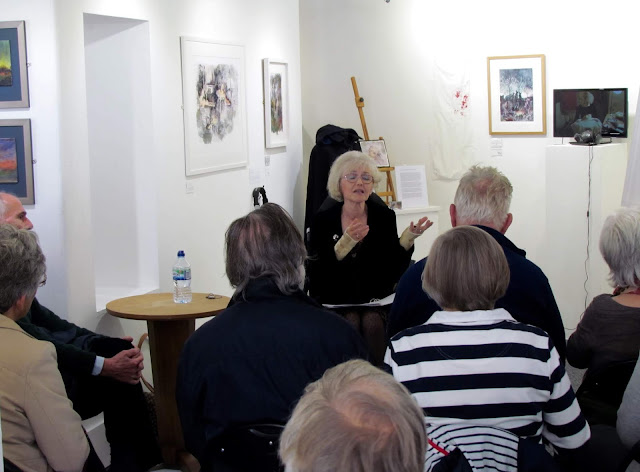 Myself in action during the reading!


Posted by Eileen Harrisson at 05:09 No comments: