This year is proving to be very fruitful for me in several ways, including having my work seen across the sea!

I was invited to put work forward for an exhibition called Zéro Euro which was within the Détissages section of a Festival of Linen in Saint-Thélo, Brittany. My piece, Rêver de la paix: se promener sans peur (To Dream of Peace: to Walk without Fear) went before a juried committee and was selected for the exhibition, along with a number of others, from among a number of entries. 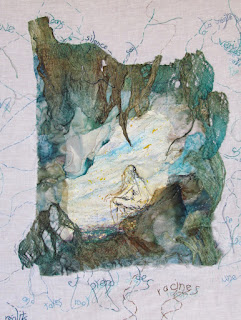 This image shows a detail from the hanging which is over a metre long and is stitched entirely by hand onto linen. The ethos of the exhibition was to demonstrate that artwork can be created without spending large amounts of money, so, in this spirit, I gave my cousin, Mel Cairns, two of my Limited Edition prints of his choice for the lovely linen which he gave to me. The contemplative figure is from a sketch I did many years ago of a friend sitting on rocks by the sea. I had always liked the little sketch and was very pleased to include it on this work. 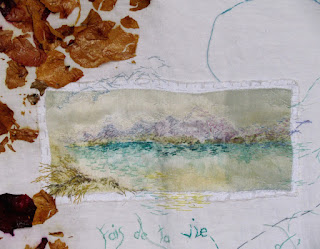 Another detail from the hanging is this little landscape, the original of which is a pencil sketch in colour of the Mourne Mountains seen from Strangford Lough. I inkjet printed the sketch onto silk then stitched over this in silk and cotton threads. All the stitch for this piece was carried out using threads inherited from another embroiderer, Marion Jones. I came into possession of these threads because, after Marion's death, her husband, Vernon, saw my work in an exhibition in Aberystwyth and contacted me to ask if I would like to have Marion's threads, as he was keen to pass them on to another artist working in stitch whose work he felt had a sympathy with that of his late wife. I was, of course, delighted to inherit these lovely threads many of which I have now used in my work, including in this one for Détissages. 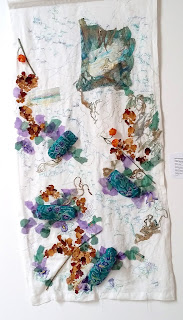 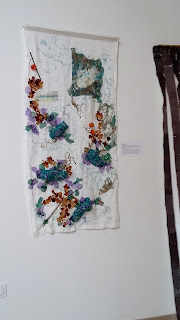 These two images show the full hanging in its position in the gallery in Saint-Thélo.

The idea behind the piece came about through thinking about my contemplative figure in conjunction with receiving little 'foot' shapes inside new footwear for myself and my husband, Arthur. These shoe shapes in card came free, so were ideal to use within the exhibition's ethos and I covered them with material from a dress I no longer wore. The feet 'walk' down the work and are accompanied by words from a favourite French author of mine, Antoine de St Exupéry. His beautiful use of words and kind philosophy of life are always a joy to read whether in the ultimately tragic but at the same time life-affirming novel Vol de Nuit (Night Flight) or in another of his very well-known works Le Petit Prince (The Little Prince).

This is, of course not easily done, if at all, but there are times when we want to reach out for something beautiful, to attain a goal and when you want to accomplish something in your life, his advice is that you do this this gradually, by taking a step and then another and it is always the same step that you begin with, again and again, in his words    -

I visualised this concept of the steps through the appliquéd feet which are embroidered after being stitched to the linen. They are also surrounded by silk-painted organza shapes and, in addition to those of the author, I stitched just a few words of my own which take the idea of the dreams and the steps and say -

These words are stitched on the piece  -  a dream perhaps, if only they could come true for more than a few moments.

All the words on the piece are in French and English. 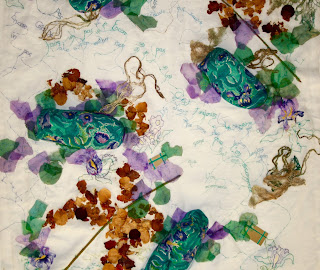 A detail from my hanging which shows the feet, words, willow wands  . . . 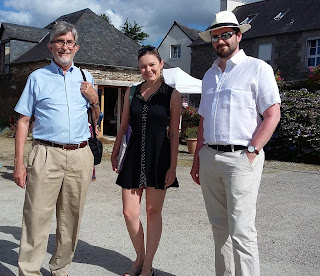 Arthur, Juls and Ed are standing near the buildings that housed the artwork  -  beautiful weather and a lovely place! In the 18th and 19th centuries, what is now the little village of Saint-Thélo near the town of Loudéac, was a thriving centre of the linen industry in Brittany and is now on what is called the  'Route du Lin'  (Linen Route). There is also a museum here that has a really good shop and space where various exhibitions of textiles, including linen, of course, are held. 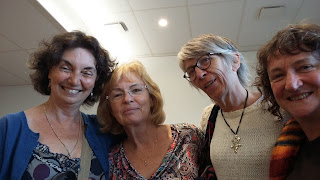 On the left is my good friend, Anne Guibert-Lassalle with artists taking part in 'Zéro Euro'. After the exhibition in Saint-Thélo, the exhibition moved to Anne's studio in Ploumanac'h and it attracted lots of attention here. She lives in a beautiful part of the coast by the famous pink granite rocks and I was delighted when the press became interested in my work in both locations! I was mentioned in two different French newspapers and these are the links to them:-

It was wonderful exhibiting in France and this isn't the end of the story . . .!


Posted by Eileen Harrisson at 09:57 No comments:

I was privileged to be invited to show work in the lovely space of St Mary's Chapel, Newman University this year by University Chaplain, Margaret Holland and it turned out to be a wonderful venue for my exhibition. The installations I chose to exhibit were The Invitation and He Wishes for the Cloths of Heaven which together became Invitation to Hope.

The boards that I used in The Cloisters Gallery, St David's Cathedral, were again ideal for the space in St Mary's Chapel to hang all my abstract portraits of Christ and the Apostles. The panels for Mary the Mother of God and Mary of Magdala then take their positions at either end of the curve of portraits. 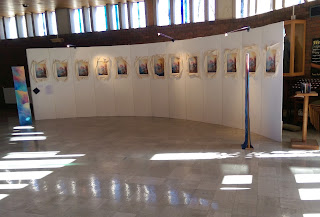 A beautiful light flows in from the windows above and behind the installation and I also like how the pieces are reflected in the floor beneath. 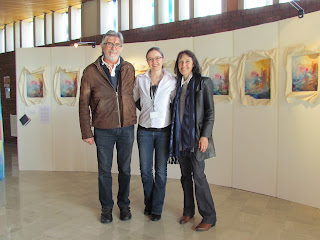 This image shows husband, Arthur, my daughter, Juliette and sister, Joyce standing by the Invitation's portraits. Juliette works as Senior Lecturer in Ancient History in the university and I was delighted that Joyce was able to come over from Ireland to see the exhibition. We had a great day in Birmingham, too!

I placed the book that I produced for The Invitation, seen to the left in this picture, along with a some information for visitors, by the portraits. The book describes my artistic processes in creating the pieces as I did and is illustrated with colour photographs of the artwork. In it, I also write of my philosophy and spirituality which play their part, not just in this installation, but in every piece of work that I do.

The other section of the exhibition, the hanging Cloth for Night and the Half-Light, was placed opposite this curved wall by an alcoved part of the chapel which was perfect for the stitched painting and smaller pieces that accompany it. 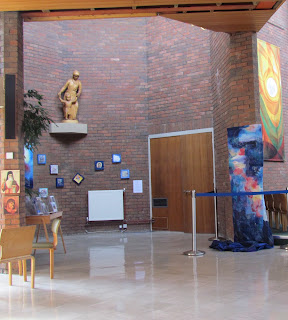 Cloth for Night and the Half-Light is seen here on the right with, on the brick wall of the alcove, the other pieces for He Wishes for the Cloths of Heaven. A table was placed here for the Visitors' Book, copies of The Invitation book and some cards and postcards of work in the exhibition. These items proved very popular with visitors. 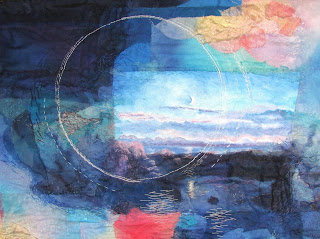 This image shows a detail from the top of Cloth for Night and the Half-Light. 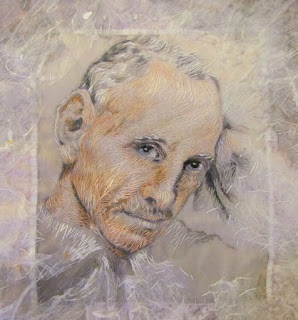 The portrait of my father is one of the small pieces featured.

A sound track which combines music from the two aspects of the exhibition was played on a loop to accompany the visual pieces.


Posted by Eileen Harrisson at 02:51 No comments: