My 'Silent Polyphonies' installation has been exhibited several times now in various galleries, both with and without sound and in its two most recent outings, the Cloisters Gallery, St Davids Cathedral, St Davids, Pembrokeshire and the Minerva Arts Centre, Llanidloes, I have been fortunate in being able to show the piece with its soundtrack. I think that it works in both guises but, at the same time, feel that without its sound, the visitor is not able to experience the piece in its entirety. I am now correcting this situation on my blog where the work has also been totally silent!


On exhibition, the soundtrack is designed to loop with a short interval between repeats, the interval inserted because, unlike the soundtrack for 'The Invitation' where the music is in the nature of a short phrase repeated in the manner of a chant, the sound for 'Silent Polyphonies' features myself performing a reading of my poem 'Of Silence and Butterflies'. This poem forms the words in the 'falling book' which is part of the installation. 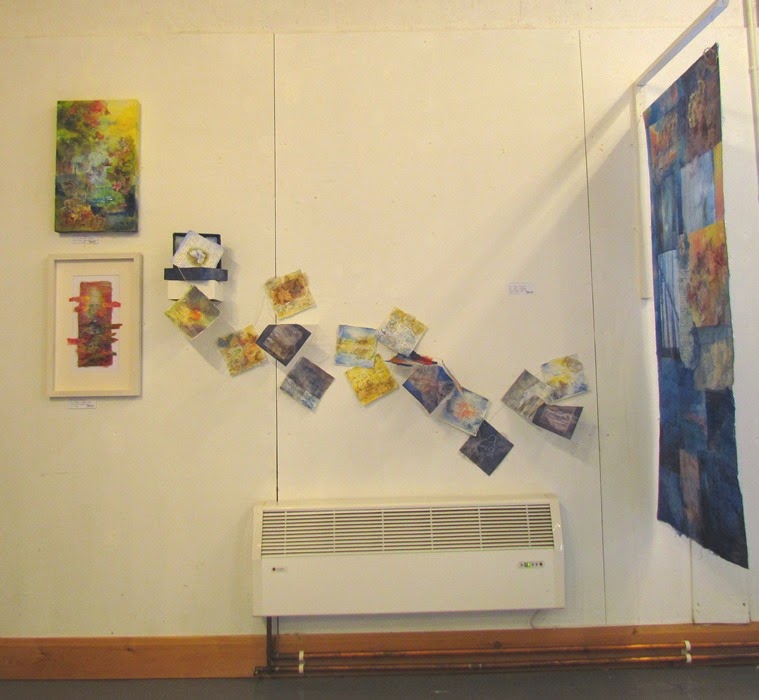 'Silent Polyphonies' in the Minerva Arts Centre, Llanidloes, showing both panel and 'falling book' with beside it 'In the Garden, Secretly' and 'Through a Glass Softly'. 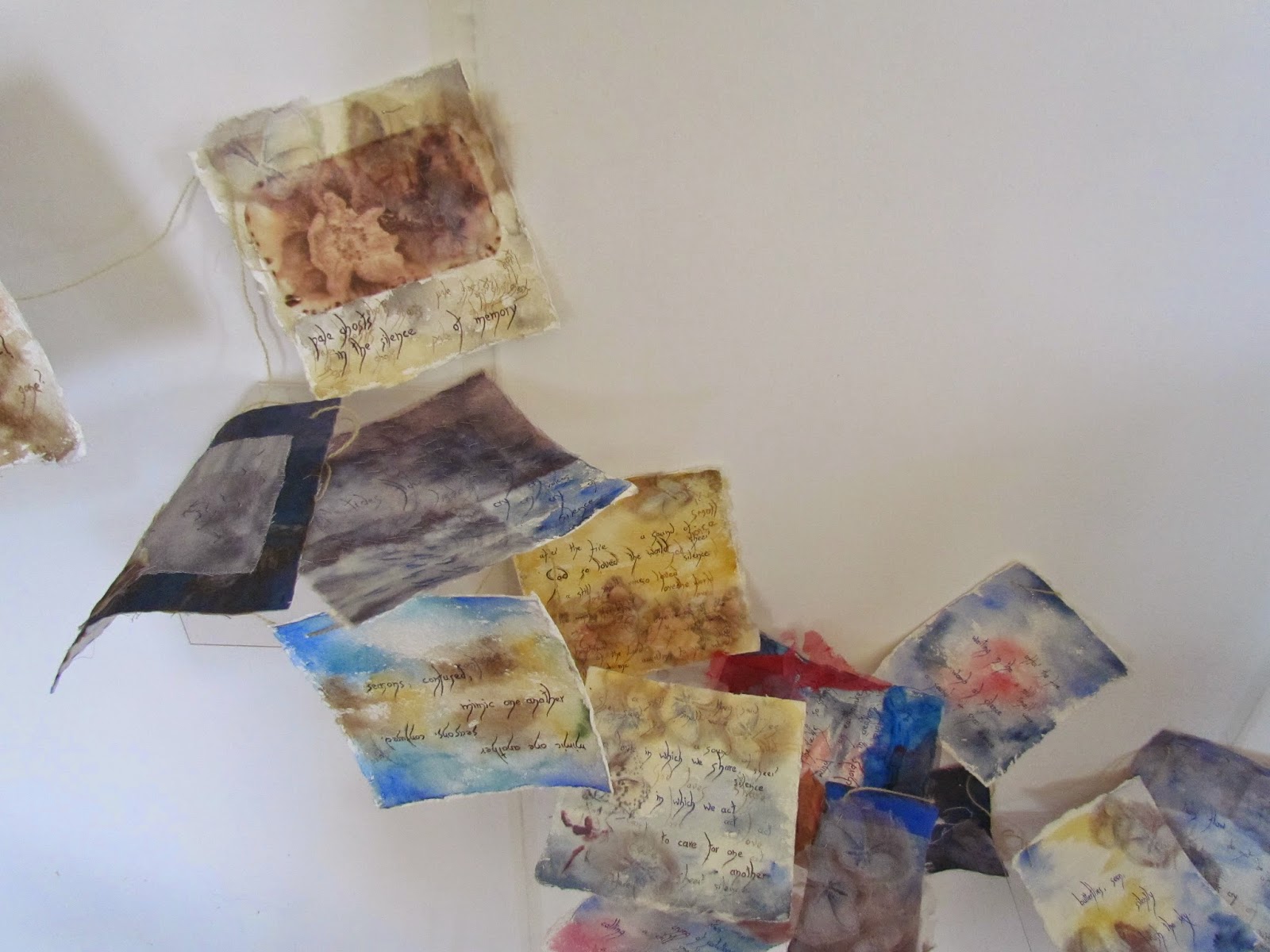 Close-up of pages in the book.


In the exhibition in Llanidloes, which finished on 26th May, I was showing with artists' group CRYD (Art Between the Waters) and the particular gallery space where we were in the Centre is also used for various workshops, so the sound could not be present at all times.

The piano music heard with the poem is a simple cadence which I composed and play myself, soft notes from Ed's double bass sounding very quietly in the background. To enhance the atmosphere and create an environment calling to mind the natural world, the sound of softly plashing water also plays during the reading. These 'watery' sounds are recordings of gentle waves breaking to the shore at Llandudno. Various attempts were made to record the sound of waves, including by the harbour at Aberystwyth, but here the wind was blowing so strongly that even sizeable waves could scarcely be heard above the buffeting of the gusts! Arthur's able-bodied ability to get right to the shore's edge was invaluable and now the acquisition of a microphone designed to pick up atmospheric sounds should aid in future recordings!

I do hope very much that you enjoy listening to the recording as I enjoyed making it! Investigations into further use of sound, musical and otherwise, in relation to stitch and word continue within my PhD at Aber. 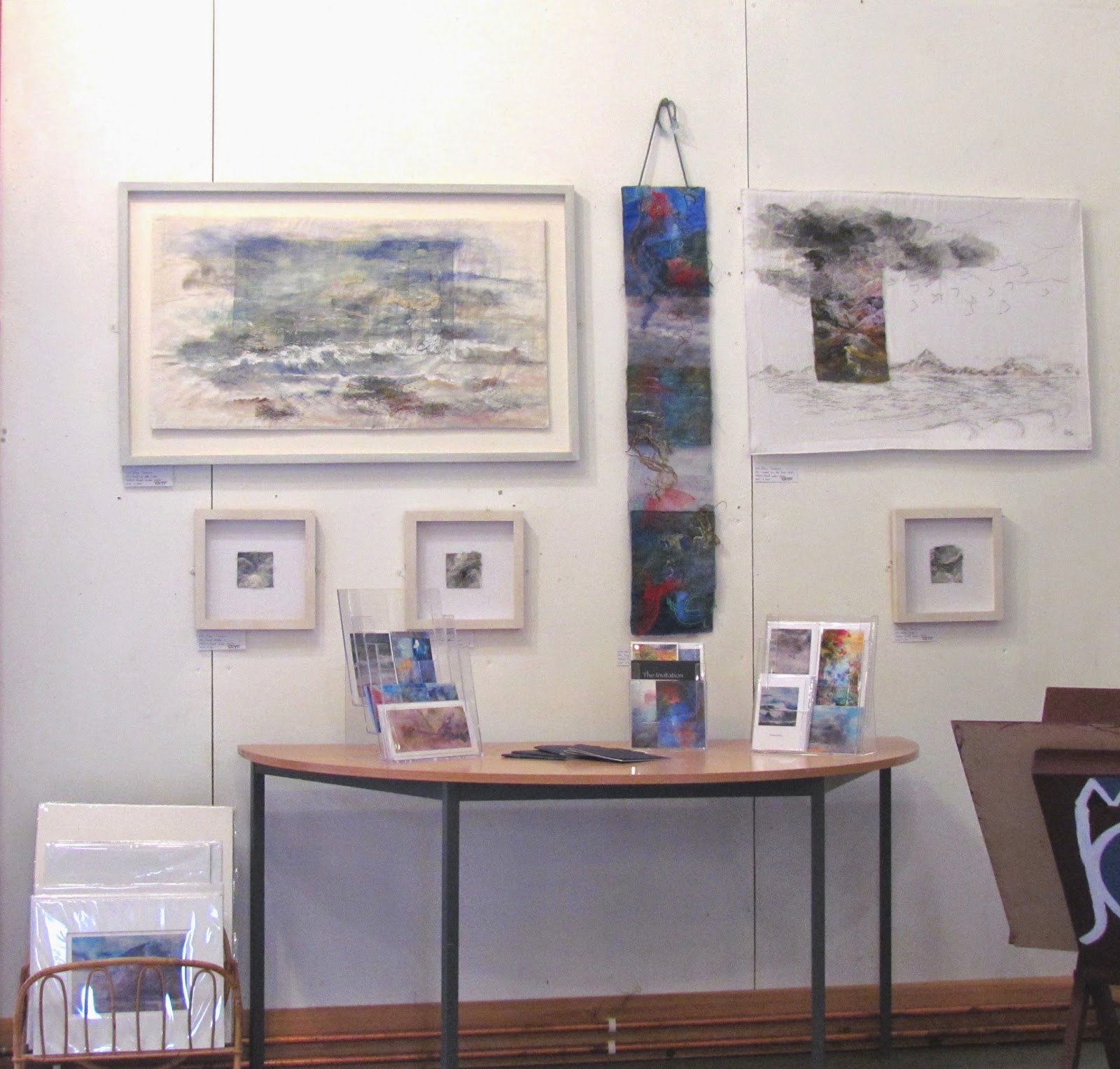 A corner of the Minerva Arts Centre showing my work during hanging.
A view of my piece 'Carried on the East Wind'.
I also had two pieces selected for this year's exhibition 'Coded: Decoded' with PRISM at the Mall Galleries, London. The exhibition, which has just finished, ran during this past week. Unfortunately, I wasn't able to be there in person this year but it was great to be showing with everybody. I do, however, hope to be with everyone at least some of the time when we exhibit in the Knitting and Stitching Shows in Alexandra Palace, London and also in Dublin and Harrogate. These shows always have stands of contemporary art stitch and are extremely popular with the public, so it's great that PRISM have been invited to show with them. Space at the Knitting and Stitching shows is limited, so we are all showing just one or two comparatively small pieces each and mine will be 'In the Garden, Secretly'. 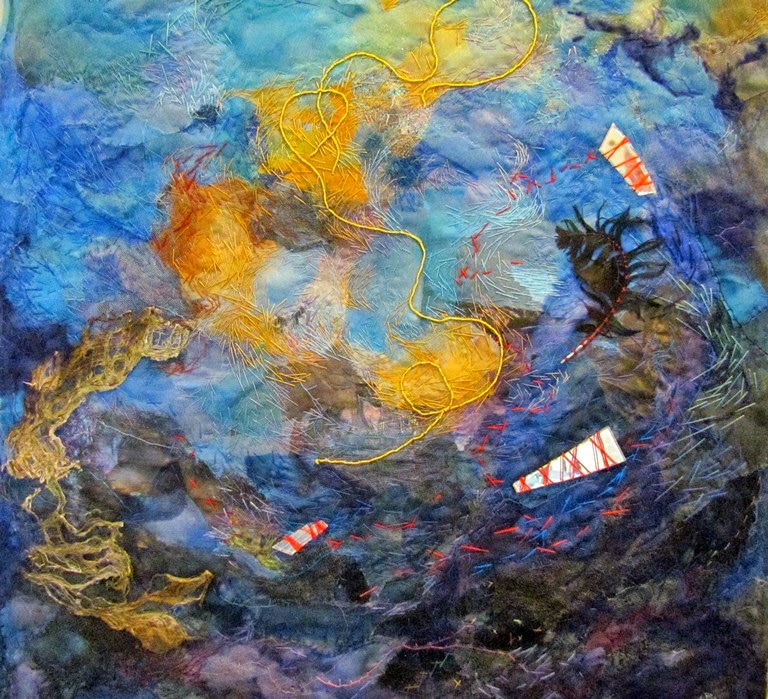 This is 'De Profundis' which was in the Mall Galleries. 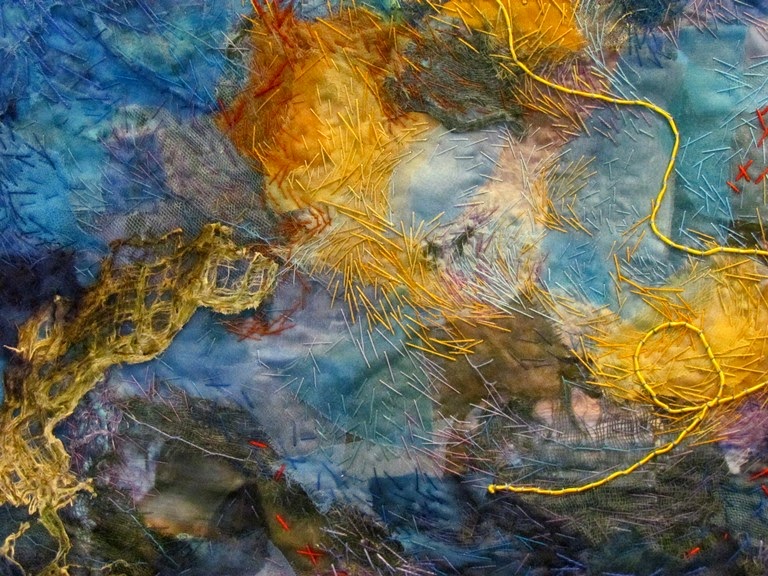 Showing a detail from 'De Profundis'. 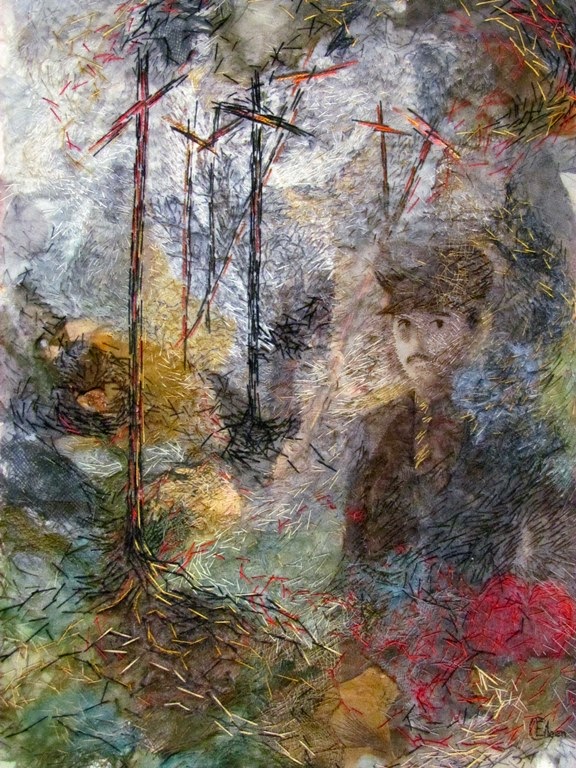 This piece, 'Requiem: les fleurs du mal'  has also just come back from The Mall Galleries.
It is impossible to ignore the significance of date just now and this image shows my sadness at the terrible futility of war. The loss of life in the First World War has come to stand as a metaphor for the suffering mankind inflicts on one another, a suffering that flares up and goes on in various parts of the world, seemingly without end. After the further tragedy of the Second World War, I do hope that the 'war to end all wars' has, indeed, ended war on a global scale with the added hope that, one day, war between any nation will be a thing consigned to history. 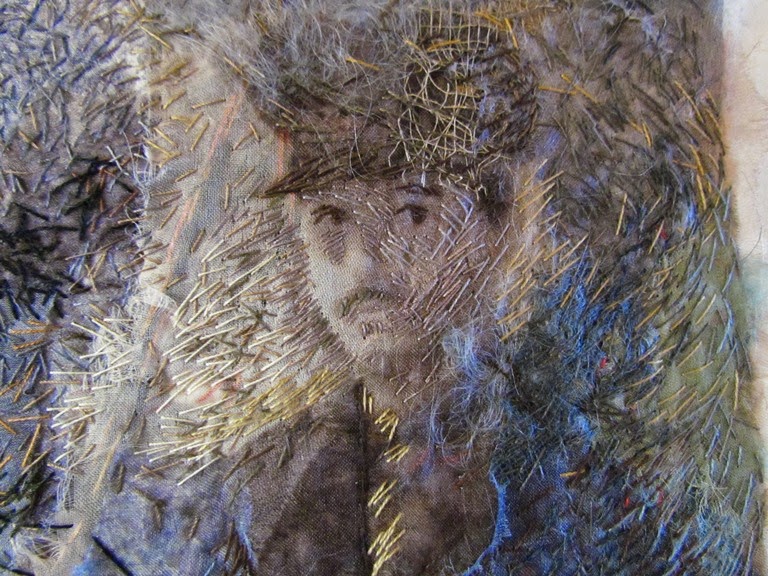 My son, Ed, was the model for this image and the frightening thing is that but for the accident of time and birth, if our time had been in the previous century, it could indeed have been Ed in just such a uniform going off to war  -  we are so very grateful to be alive in this century with, despite the ongoing threat of world terrorism, at least the majority of the world's nations at peace, old enmities fought over on the stage of the United Nations rather than the slaughter of the battlefield.

Posted by Eileen Harrisson at 12:15 No comments: