With words and beyond

Last year, I also took part in Prism's London Exhibition Lines of Communication in Hoxton Arches Gallery, late May 2015, with my pieces Leitmotif and Continuum.

The many lines of hand stitching in Continuum seek to speak to others about the tragedy and horror of conflict. This piece was also exhibited in The Tabernacle, MOMA for my solo exhibition A Sense of Longing: Hiraeth and for MOMA, I had put Continuum in a white wood frame, unglazed as I prefer and I had been pleased with how it looked. 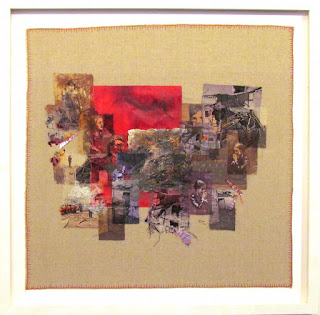 This image shows the full piece,  in its frame, as it was exhibited in MOMA. You can also see the overall form of the collaged sections on the natural brown linen ground. Red is an important colour in this work  -  the red of blood, of anger, of conflict  -  and a soft hue of silk thread in tones of crimson moving toward cherry was picked out to edge the linen in blanket stitch. 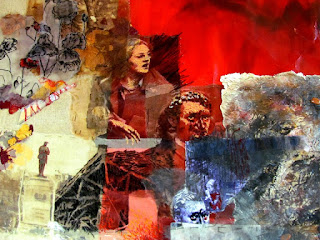 This detail shows how the colour red impacts in the piece. It is there within the poppies, on the threads that attach the broken mirror shard and it forms a base like blood on which are stitched images of a victim of a bomb blast during N. Ireland's Troubles, a girl trying to give aid, a crying child, ruined buildings and also the War Memorial in Enniskillen where, in 1987 an IRA bomb killed several and injured others who had come to attend the commemoration on Armistice Day, 11th November. One victim was a young woman who was a student nurse in the Royal Victoria Hospital and, in an act of great charity and compassion, her father forgave his daughter's killers.


However, for Prism, I was asked if I would take the piece out of the frame and exhibit it simply pinned to the gallery wall. Thinking about it, I thought that the piece could also work in this way as it hangs well and keeps its shape without distracting folds that would make it hard to read. This is partly because the lovely raw, bleached linen ground that the collaged pieces are stitched onto holds its shape very well. 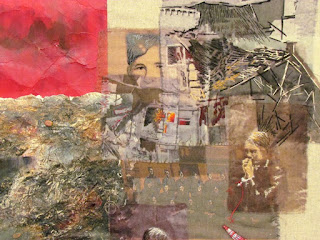 This detail shows my father in his RAF uniform's forage cap and also his squadron photographed at Morecambe. He also served on the Lleyn Peninsula in Wales. The bombed buildings are from Belfast's Troubles and the image of a crying child is taken from a photograph of this time. I stitched this figure of the child several times in slightly different guises on the piece as representative of all the children who have suffered and continue to suffer at the hands of adults as they wage their seemingly endless conflicts in so many parts of the globe.

The gallery in Hoxton Arches has a couple of 'rooms', the first being the space where you enter the gallery then, walking through this area, you pass through into the second space. This area or 'room' has a doorway into a courtyard and this doorway was kept open during the exhibition. With Continuum hung in this part of the gallery, whenever a little breeze wafted in from outside, the piece moved gently on the draught of air, floating softly on its pins. As the brown-coloured linen ground was edged in red blanket stitch to give the impression of an army blanket such as a soldier might carry, this gentle movement in the draughts of air gave the piece an added poignancy and fragility. I appreciated the sensitive positioning of Continuum in the gallery. 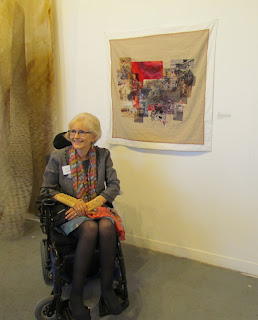 Myself with Continuum in Hoxton Arches, May 2015

Just a little word to add to this is that some of the images I created for Continuum were inspired by photos of the Troubles that I researched and was given permission to use by the Press Association.

Leitmotif also had its place in this exhibition, as it was inspired by lines from the poetry of Gerard Manley Hopkins. I have loved the vivid word pictures and flowing rhythms of this wonderful poet's works ever since I first read them, as a teenager coming across the words, 'Each mortal thing . . . selves . . . goes itself, Myself it speaks and spells'. I was immediately intrigued by this describing, in lilting words, of how everyone in creation has their own being, own character, own way of living and, in my artwork, I decided to create a piece that would take these words and speak about myself, giving key moments and factors of my life and including at least some of the people I love.

To make this piece, I chose a stretched block linen canvas as base and I painted a background in acrylics on the canvas. Across this ground, I applied pieces inkjet printed onto organza, silk and cotton and stitched over these in cotton, silk and linen threads  -  I always prefer using threads in natural rather than synthetic materials. Other images are realised in threads hand stitched directly into the linen canvas which is a lovely fabric to stitch into. 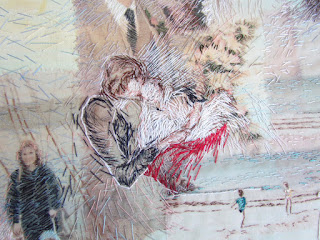 In the centre is myself holding daughter Juliette, a small baby, with down on the right, Juliette and son Edward when, as young children, they played on a beautiful beach in Scotland, Camusdarach near Mallaig one wonderful half-term holiday in May when the temperature was in the twenties and we were almost the only people on this great stretch of sandy bay! 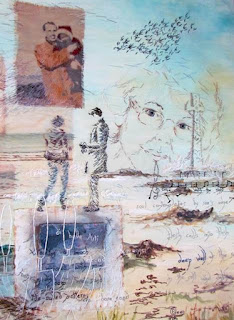 On another part of the piece, here they are as adults on the beach at Barmouth just near us here in Wales one recent winter's day. My Dad is pictured, too,  holding me when I was just a baby  -  by a beach in Co. Down this time!  -  and the stitched image of the Celtic Cross is of the large one in stone that stands outside Iona Abbey on that  beautiful Scottish island, for me, one of earth's liminal places! The closed beach brollies stitched in white are ones I saw one magical sparkling evening on the beach at Marina di Ravenna. My study year abroad when I lived in Ravenna and attended the Accademia di Belle Arti di Ravenna was significant for me and remains so. The wonderful people I met during this time and the kindness and generosity of the lovely friends I made will remain forever precious to me. 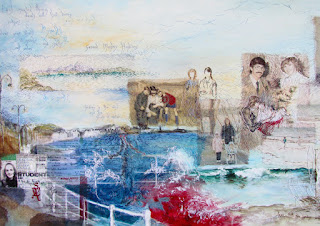 Aberystwyth is on extreme left of this image with, beside it an image of Arthur, Juliette and Edward taken from a favourite photo of mine of the three of them by Craobh Haven on Scotland's West Coast just south of Oban. This was a beautiful place that we were fortunate to stay in or near to several times. Peeping to the right of this is a little stitched outline sketch of myself and my sister Joyce (in the Cotswolds at the time and I could still walk, albeit with a stick and some help from a person!), then comes myself with Juliette and Ed when they were very young and, on the right, Arthur and I on our marriage. There is also a stitched image of myself as an almost ghost by the prom railing  -  there is a tale behind that (for another day!)  -  and a portrait image of what I looked like as a student in the 1970s; the fiery red is for the bombs that haunted this decade when I returned to work in Belfast after my graduation.

The words that inspired this piece are stitched on the top left close to a little image of the Mourne Mountains seen from Strangford Lough. There are also words and phrases of my own scattered across the piece.

All in all, a stitched and painted capsule of me!


Posted by Eileen Harrisson at 04:35 No comments: